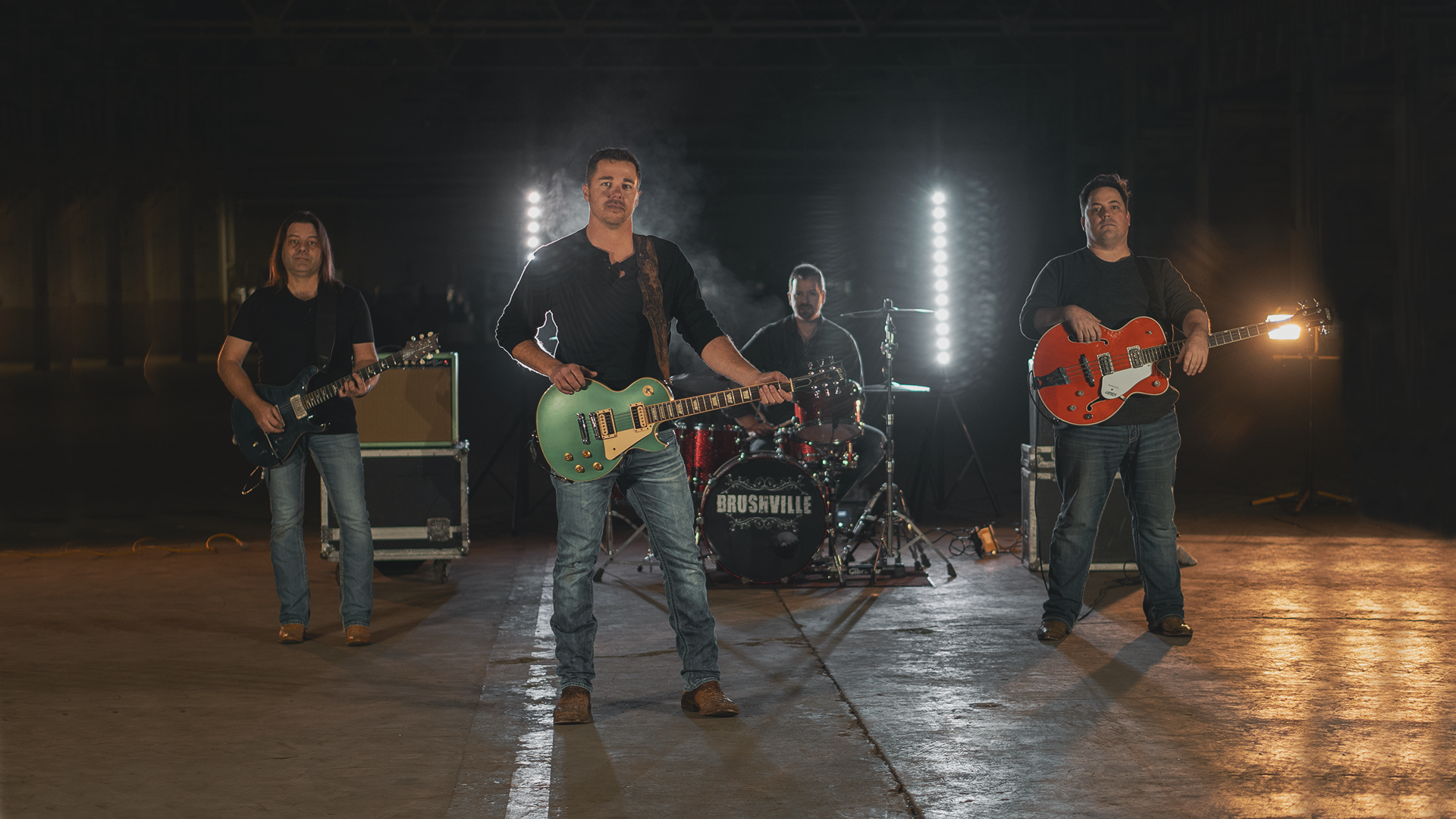 Bloomington-Normal may not be the first place you imagine when you think upbeat rockin country music. Think again! Brushville brings down the house with sold out shows all across the country. This four-piece is in your face while showcasing their passion and talent. CMT called Brushville “explosive.” They said when thinking of their music, “think matches and gasoline…”

Even though they are known for their live performance, their first album in 2014 made waves in the industry. One week after release, self-titled album Brushville rose to No. 1 on the Billboard Heatseeker chart and No. 22 on iTunes Top Country Albums chart. Vince Hoffard of the Southern called them, “one of the best new bands in the industry.” The album was produced by multiple Grammy® winning, platinum producer Kyle Lehning. Lehning is credited with producing for legendary Randy Travis and Dan Seals. “Baby’s Got Her Boots On,” the first single of the album was co-written by Tyler Farr. Nashville songwriting veterans Rhett Akins and Ben Hayslip co-wrote the second single, “Dangerous.” They are known for songs by Blake Shelton and Jason Aldean.

In March 2018 “Girl in a Trucker Hat” single was released to excited crowds and national radio airplay. In the summer of 2018, Brushville released their second album, Taking You Higher to rave reviews from critics and audiences. Recorded at Eclipse Studio in Bloomington with Grammy-nominated producer Erik Nelson, Taking You Higher is a blend of modern country and good old fashioned rock n roll. The album keeps the upbeat rockin country sound that made the band electric from the beginning.

We use cookies on our website to give you the most relevant experience by remembering your preferences and repeat visits. By clicking “Accept”, you consent to the use of ALL the cookies.
.
Cookie SettingsAccept
Manage consent

This website uses cookies to improve your experience while you navigate through the website. Out of these, the cookies that are categorized as necessary are stored on your browser as they are essential for the working of basic functionalities of the website. We also use third-party cookies that help us analyze and understand how you use this website. These cookies will be stored in your browser only with your consent. You also have the option to opt-out of these cookies. But opting out of some of these cookies may affect your browsing experience.
Necessary Always Enabled
Necessary cookies are absolutely essential for the website to function properly. These cookies ensure basic functionalities and security features of the website, anonymously.
Functional
Functional cookies help to perform certain functionalities like sharing the content of the website on social media platforms, collect feedbacks, and other third-party features.
Performance
Performance cookies are used to understand and analyze the key performance indexes of the website which helps in delivering a better user experience for the visitors.
Analytics
Analytical cookies are used to understand how visitors interact with the website. These cookies help provide information on metrics the number of visitors, bounce rate, traffic source, etc.
Advertisement
Advertisement cookies are used to provide visitors with relevant ads and marketing campaigns. These cookies track visitors across websites and collect information to provide customized ads.
Others
Other uncategorized cookies are those that are being analyzed and have not been classified into a category as yet.
SAVE & ACCEPT