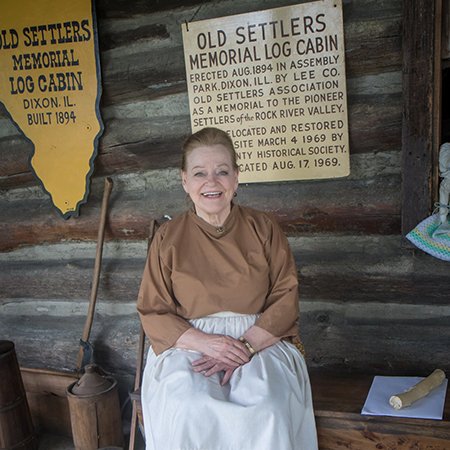 The cabin was built in 1894 by the Old Settlers Association of Lee County as a memorial to the pioneers who came to live in the County prior to 1850. The original idea was to build a cabin much as the pioneers would have used. This cabin was built in a way that it would withstand the ravages of time. The original location was up river in Northeast Dixon in an area called Assembly Park. The cabin was moved on March 4, 1969.

After several attempts had been made to have the cabin placed at several locations, the present site was approved by the State of Illinois, which owns this park that includes the statue of Abraham Lincoln as a young man.

This is a historic site. During the early 1830s Fort Dixon, a blockhouse type of fortification with earthwork, was situated in the immediate area and was used during the Blackhawk War. It was here that Captain Abraham Lincoln saw his only military service while serving in the Black Hawk War during a 2 ½ month period in the spring and summer of 1832.

The cabin interior is made to appear typical of the 1850s. The furnishings are a combination of items from the local area, donated in many cases, and those purchased by the former Lee County Historical Society.